Pingree girls’ ice hockey participates in the Eastern Independent League alongside Beaver Country Day School, Berwick Academy, Dana Hall School, Newton Country Day School, Portsmouth Abbey School, and Winsor School. Other common non-league opponents are Groton School, Hebron Academy, North Yarmouth Academy, Proctor Academy, St. George’s School, and Tilton School. The girls play a 22 game schedule and host an annual holiday tournament in December. This tournament is a highlight as it involves local public and private schools as well as a skills competition. Pingree coaches emphasize teamwork and respect, teaching all skills of the game from skating to shooting, and strive for the girls to improve every time their skates touch the ice. We are looking forward to another successful season on the ice! 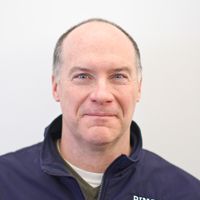 Jim MacLaughlin has had a long association with Pingree hockey. A 1984 graduate of Pingree, Jim was the first winner of the James C Deveney Award, and was named a Beverly Times All-Star while a student. After playing at Union College, where he was a member of the 1985 ECAC West Championship team, Mr. MacLaughlin returned to Pingree in 1988 as an English teacher and was the founding coach of the girls varsity ice hockey program.